Around 11PM EST on May 16th, a sell order for around 5,000 BTC appeared on the Bitstamp order book. Over the course of the next 15 minutes, the BTC price on Bitstamp continuously fell – skewing the entire market and triggering hundreds of millions in long liquidations. So how did this happen, and what can be done to limit the impact of similar market aberrations in the future?

A sell order of 5000 BTC on a retail exchange is a red flag right from the get go. Typically a trade of this size would be executed through Over-The-Counter (OTC) brokers, as opposed to on the open market, because using OTC a seller should be able to obtain a better price without considerable slippage. 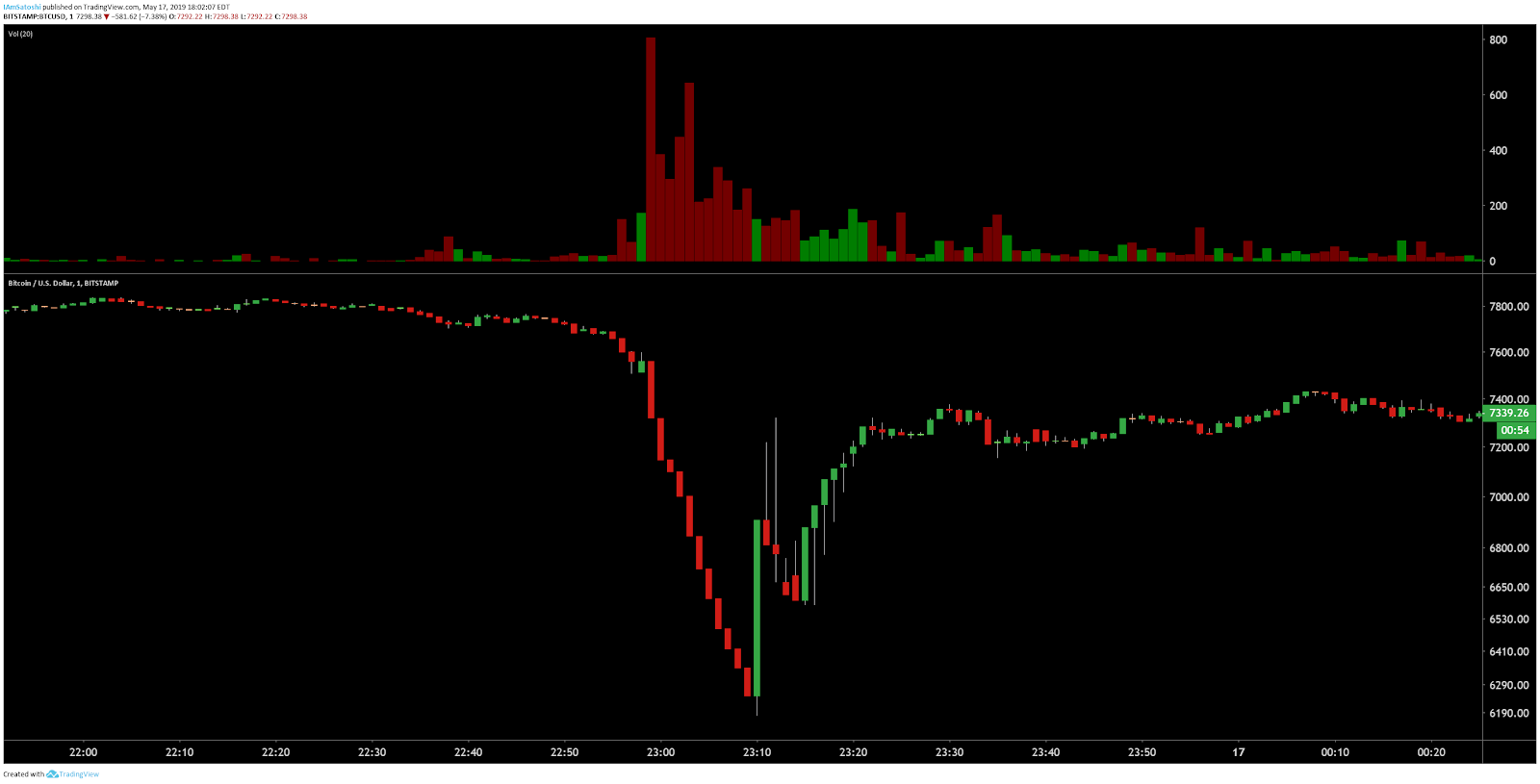 In this case, the potential for market manipulation was high because of the nature of order types available on Bitstamp. The exchange offers five types of orders on its platform; Instant, Limit, Market, Stop, and Trailing Stop Order. This sell order likely occurred through an ?Instant Order? with the help of the trading engine. Legacy markets (like commodities and Forex, for example) do not typically have this functionality for market orders.

The reason is because other orders may have failed to execute as the price would have gotten too low to be acceptable to a seller in normal circumstances. But the Instant Order keeps repositioning at lower and lower price levels, and the seller in this case was happy to lose on the deal – which suggests market manipulation.

Early morning on the 17th, Bitstamp acknowledged the event on Twitter and informed users an active investigation was underway. ?A large sell order was executed on our BTC/USD pair today, strongly impacting the order book. Our system behaved as designed, processing and fulfilling the client?s order as it was received. We closely examine every event that causes large-scale movement in our order book and have started an immediate case investigation.?

Looking further at the Bitstamp trade history compared to Brave New Coin?s Bitcoin Liquid Index (see figure 1) there was a continuous downward cascade of price until the order was filled. If this trade had executed quickly on the exchange, over the course of a few minutes instead of almost 15 minutes, it is unlikely the entire market would have followed. 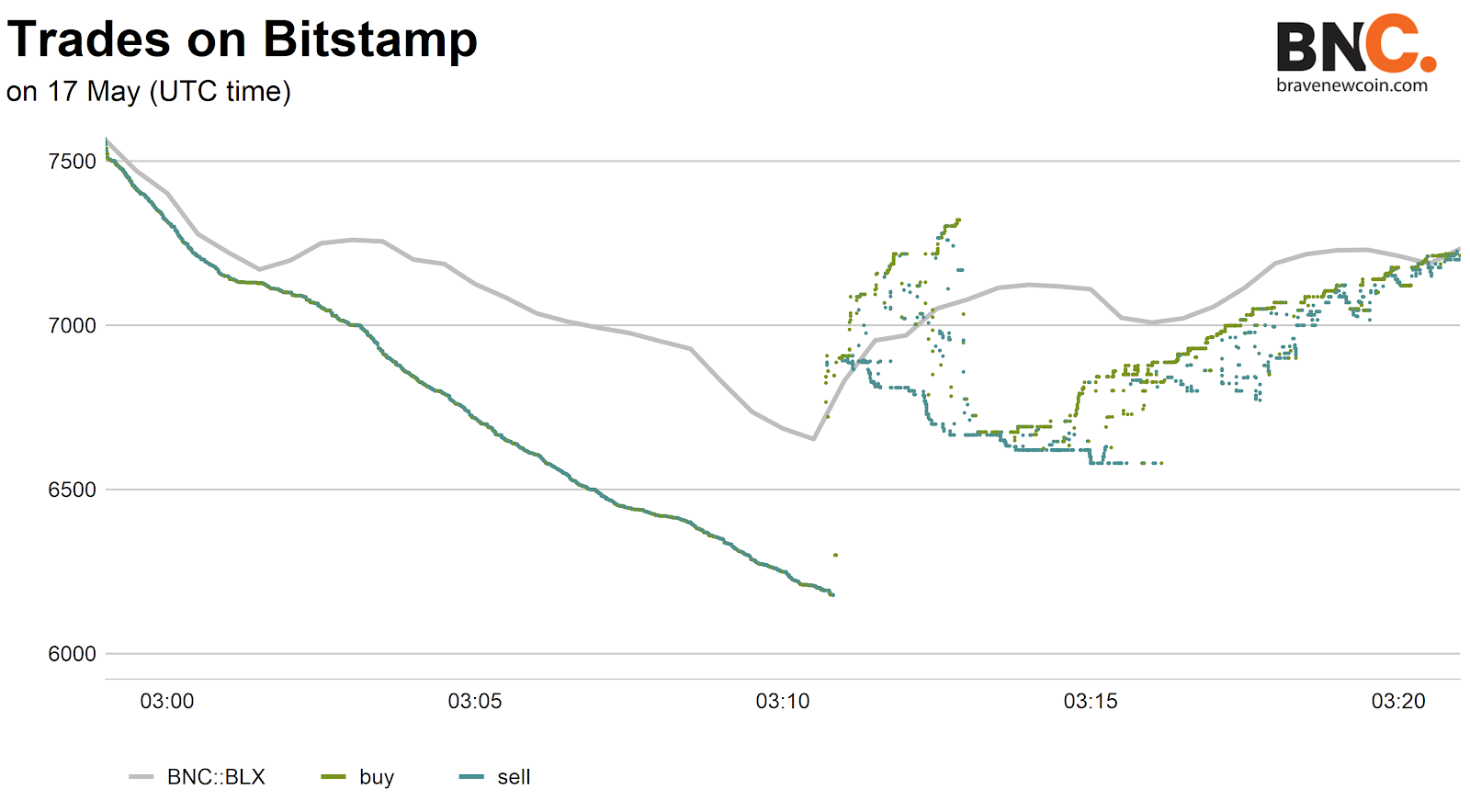 The importance of constituent numbers and index weighting

Bitstamp is used as a constituent exchange in most indices industry wide (including BNC? BLX) for two reasons – 1) it?s the oldest running Bitcoin exchange and 2) there are no USDT pairs offered on the platform. This ?no USDT? aspect is important because Bitstamp should legitimately be considered more robust because it is dealing directly with fiat pairs (and not the murky digital US dollar which has had its own issues recently around operating a fractional reserve). In addition, not offering USDT pairs to traders means they don?t have a useful borderless, AML/KYC-less digital dollar as a liquidity option.

As illustrated in Figure 2, derivatives platforms use a weighted-average of the index constituents with dynamic inclusion and exclusion criteria. BitMEX, which has exceeded US$5 billion in 24 hour volume, uses the least robust index of all the derivatives exchanges, accounting for just two exchanges weighted 50/50 at the time of the event.

The number of constituent exchanges is important during extraordinary events. During the May 16th Bitstamp flash crash, for example, BNC?s BLX briefly breached the US$6,660 zone before bouncing (see figure 3), whereas the BitMEX price reached US$6,382 and CME?s Bitcoin Reference Rate (BRR) reached US$6,320. 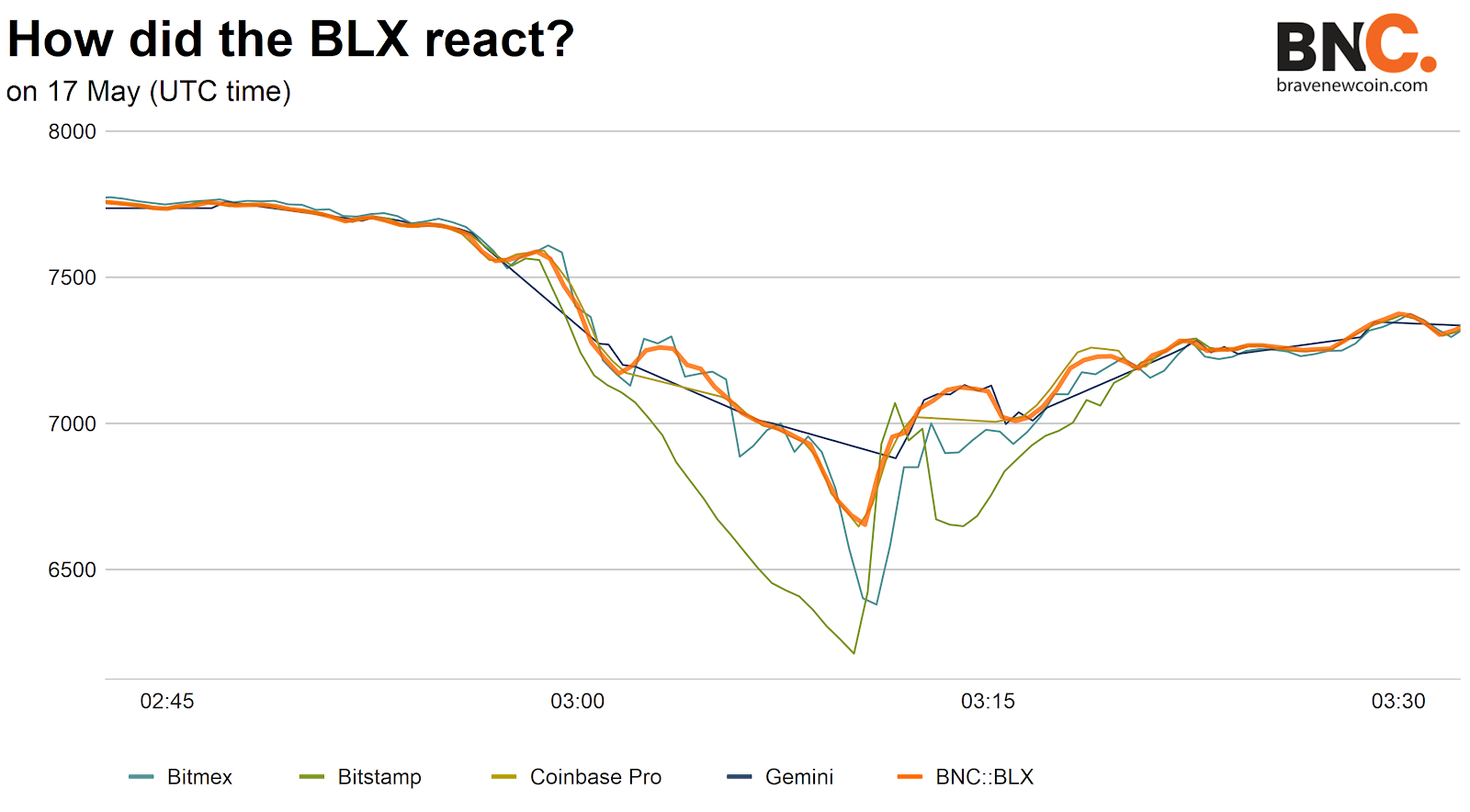 The methodology behind the BLX is comprehensive and designed to minimize the effect of market aberrations. Real-time trade data is captured, formatted and then scrubbed for outlier transactions. Anomalous transactions are tagged and stored but have no influence over the index calculation. The constituent order books are also sampled, both bid and ask, to establish the depth of liquidity.

The constituent USD prices are then weighted according to four variables: moving total trade volume, order book depth, constituent historical performance and price deviation from the median. This factor weighting ensures the index is responsive to sudden market movements, while also limiting the impact of outlier transactions and market interruption events.

The end result of the Bitstamp ?flash crash? was over US$200 million in long liquidations on BitMEX as well as multiple other derivatives platforms. The event will likely result in limitations of the Instant Order functionality on Bitstamp – and ultimately prompts the question as to how long it will be before the market demands that all derivatives platforms use robust, institutional grade indices to protect against market manipulation and disincentivize the exploitation of weaknesses in exchange infrastructure.