If the potential roadmap improvements are added, ZRX token use cases and value may increase.

0x (ZRX) is an ERC-20 token designed to power decentralized exchanges (DEXs). The current USD spot price is down 73% from the all time high set in January 2018. With a total value of US$208 million, ZRX is currently ranked 45th on the BraveNewCoin market cap table.

The rise of DEXs is, in part, a response to the more than US$1.5 billion lost by centralized exchanges in the form of hacks, malfeasance, or incompetence over the past 10 years. The user maintains custody of their assets while using most DEXs, as opposed to centralized exchanges which require assets to be deposited in exchange wallets. This key difference removes the incentive for hackers to steal coins.

ZRX provides exchange architecture for DEXs through a system of relayers (shown below). ZRX also uses a messaging format for trade settlement, and a system of smart contracts for a decentralized governance module, which has yet to be implemented.

Decentralized governance was included in an attempt to reduce the friction associated with upgrades and platform downtime. Relayers can use the ZRX token to approve or disapprove potential future upgrades, which decreases the circulating supply, and is reminiscent of Proof of Stake. This model does not prevent relayers from forking the ZRX protocol, should they wish to implement their own changes, or if they disagree with changes implemented by the ZRX core team.

In December 2018, DDEX forked the ZRX protocol and created the Hydro protocol. CEO of DDEX, Tian Li, stated that the DDEX and ZRX teams had divergent opinions on what constituted an urgent protocol improvement, and whether fee-based tokens create unnecessary friction.

The ZRX protocol was founded by engineer and self-proclaimed U.C.S.D. Ph.D. dropout, Will Warren, and a former fixed-income trader, Amir Bandeali, neither of which had a body of technical work experience before starting the project. Bandeali previously worked for a leading Over The Counter cryptocurrency trading platform, DRW.

The ZRX token ICO occurred in August 2017 and raised US$24 million through the sale of 500 million of the one billion tokens created. The remaining 50% of the tokens were split between the 0x company, a developer fund, the founding team, early backers, and advisors. Tokens allocated to founders, advisors, and staff members were locked in a four-year vesting schedule.

While there were no pre-sale or reservation agreements, PolyChain Capital lead an early seed round which covered legal fees. The ZRX team continues to hold 13,820 ETH in their treasury, currently valued at US$3.74 million. At least half of the treasury was spent during 2017, with a further 11,000 ETH spent in late December 2018, and 4,000 ETH spent last week (red bars, chart below).

In September 2018, ZRX released V2 of the protocol which brought several new features including; the 0x Portal, Non-Fungible Token support (ERC-721), increased order matching efficiency, and the option for permissioned liquidity pools where token addresses must meet specific requirements that enable the enforcement and adherence to KYC/AML regulations. Wyre has also been working with DEXs to help integrate a KYC token, as well as a fiat to Dai (DAI) on-ramp.

DEX legal compliance was thrust into the spotlight in November 2018 when the U.S. Securities and Exchange Commission fined the founder of EtherDelta, a non-ZRX DEX, US$388,000 for operating an unregistered national securities exchange. 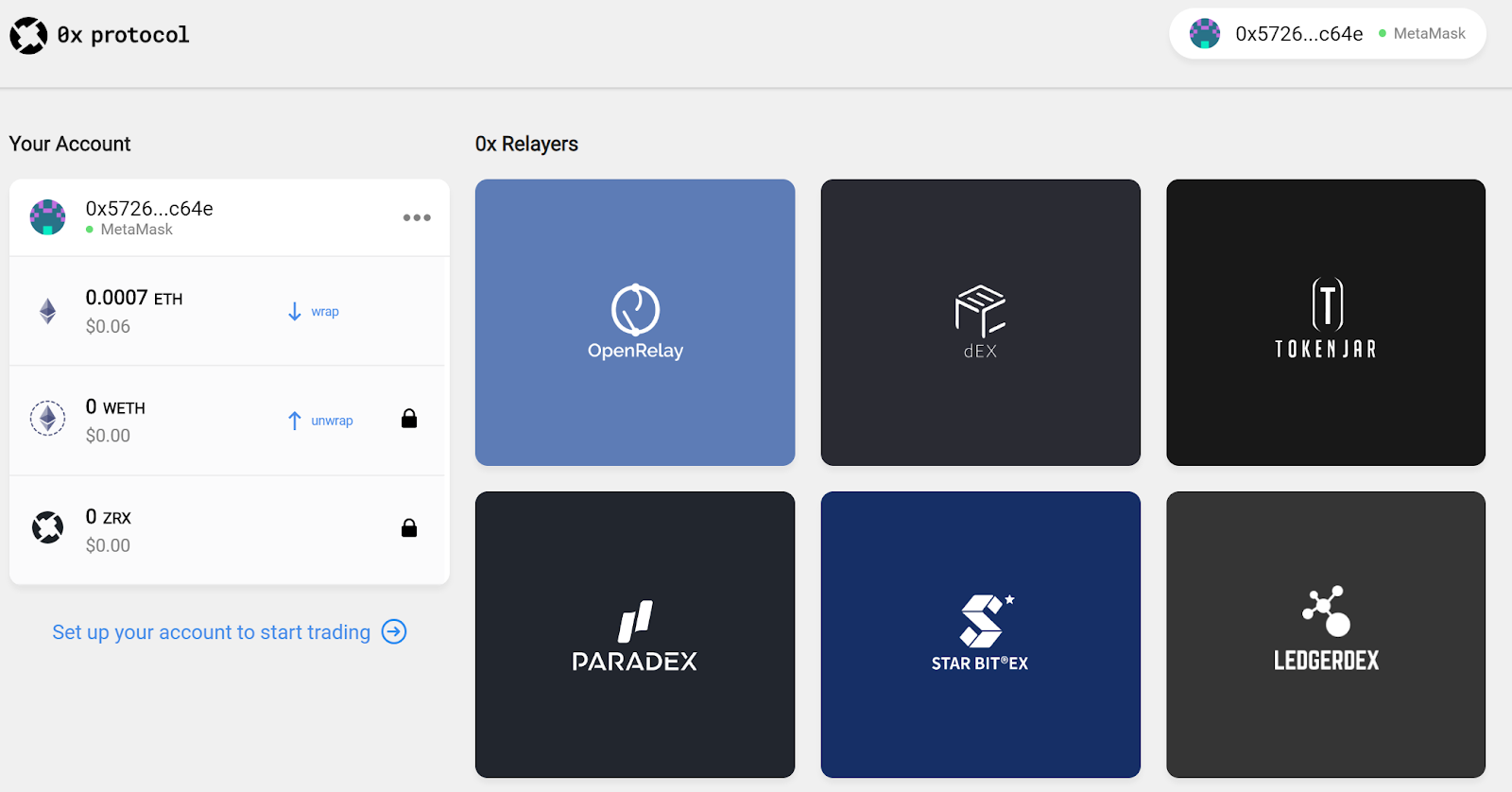 0x Instant was released in December 2018, which enabled crypto purchases on any app or website with a few lines of code. Instant is open-source, configurable, and allows hosts to earn affiliate fees on every transaction. The process works by aggregating liquidity from 0x relayers and finding the best price for the purchaser. The transaction occurs using Ethereum (ETH) through MetaMask, Ledger, Trezor, or any other Ethereum wallet. 0x has also attracted NFT marketplaces, like Emoon, to the family of relayers. Emoon also has 0x instant enabled.

In January, ZRX announced a market maker program to improve liquidity across ZRX relayers. Market makers increase liquidity by adding to order book depth when necessary. Accepted applicants can receive up to US$15,000 for completing the onboarding process.

Throughout this year, the ZRX team has updated the roadmap for future protocol changes, or 0x Improvement Proposals (ZEIPs). One key upcoming change is the inclusion of improved networked liquidity amongst relayers in the ecosystem through 0x Mesh. This change would increase market access for relayers, making it easier to connect to and share orders with other members of the 0x ecosystem. Each node in the network will also score it?s neighbors based on the quantity and quality of the orders it shares. 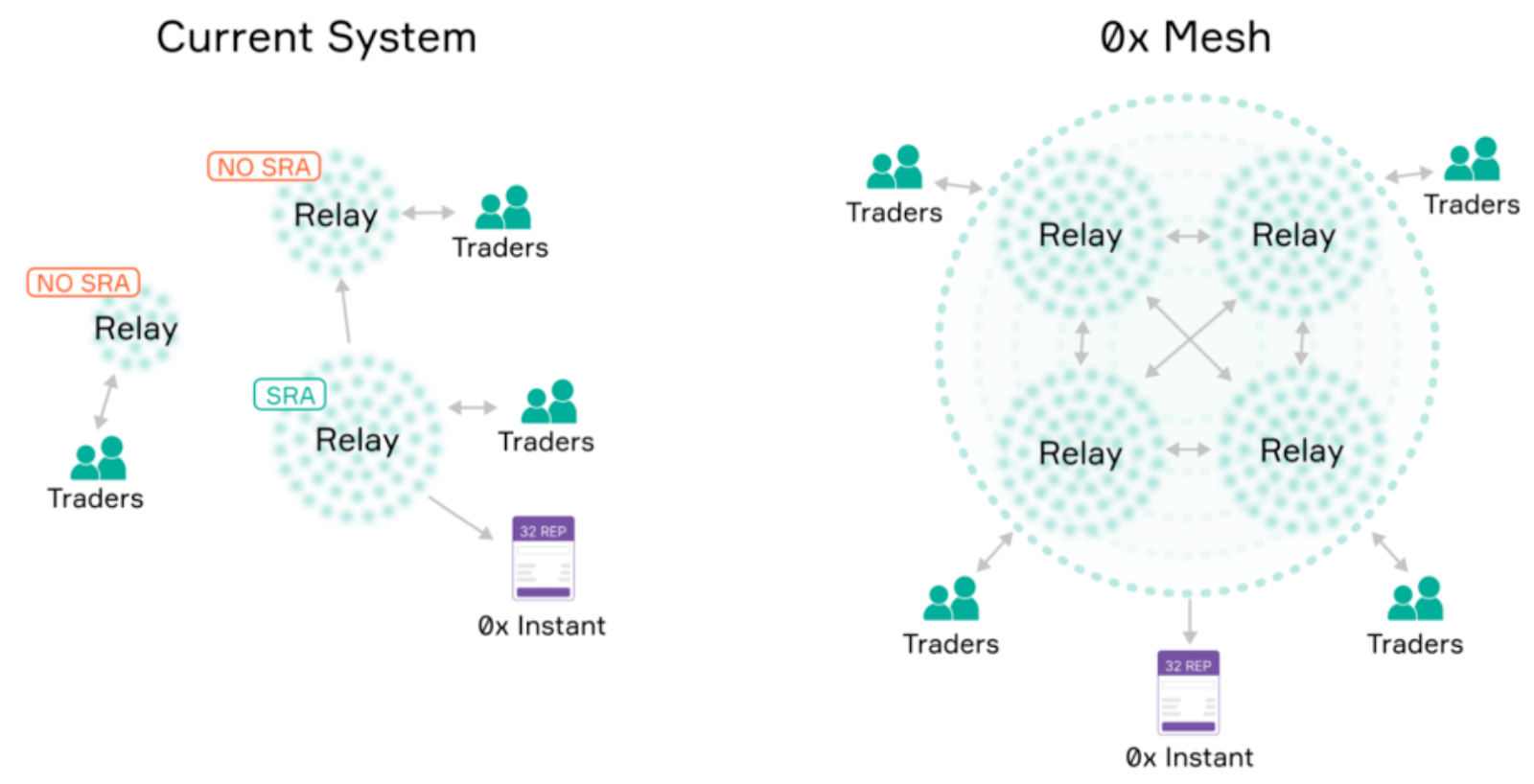 Last month, Warren proposed a stake-based liquidity incentive (ZEIP-31) aimed for a Q3 2019 release. ZEIP-31 changes will mean that market takers pay a small protocol fee on each ZRX trade and market makers receive a liquidity reward proportional to the protocol fees generated from their orders and their stake of ZRX tokens. Market makers who do not own sufficient ZRX to collect liquidity rewards will also be able to form a ZRX staking pool for third-party delegators.

Since April 2018, total USD network volume (chart below) across all relayers has decreased substantially, while ZRX fees are basically non-existent (not shown). Exchange fills have dropped off substantially since mid-December 2018, when DDEX left the ZRX protocol. Of the 12 DEXs tracked, Tokenlon leads by trade volume and the number of trades. The most popular tokens traded between all relayers is Wrapped ETH, an ERC-20 compliant derivative of ETH, Dai (DAI), and Tether (USDT).

Declining ZRX token transactions can be attributed to an inherent lack of importance regarding the ZRX token itself. The ZRX tokens are almost purely a speculative vehicle and are not required to trade on relayers. Without any pending governance decisions or ZRX denominated fees, relayers themselves have no reason to hold the token. Warren has discussed this issue, including the possibility of relayers adding a staking feature to decrease user fees, as well as the ZRX team focusing on long term value creation rather than short-term token price increases.

The 30-day Kalichkin network value to estimated on-chain daily transactions (NVT) ratio (line, chart below) has risen from 20 to 60 over the course of the past six months. A rising NVT suggests the coin is overvalued based on its economic activity and utility, which should be seen as a bearish price indicator.

Daily active addresses (fill, chart below) increased dramatically throughout October and early November, but have since declined. This rise in active addresses corresponds with the Coinbase listing in mid-October. Active and unique addresses are important to consider when determining the fundamental value of the network using Metcalfe’s law.

The ZRX project has 59 repos on GitHub with over 50 developers contributing over 6,500 commits to ZRX repos in the past year. Most of the ZRX related commits have occurred in the 0x-monorepo (shown below).

Most coins use the developer community of GitHub where files are saved in folders called "repositories," or "repos," and changes to these files are recorded with "commits," which save a record of what changes were made, when, and by who. Although commits represent quantity and not necessarily quality, a higher number of commits can signify higher dev activity and interest.

Exchange traded volume has been led by the Bitcoin (BTC) and Tether (USDT) pairs on Binance, Coinbase Pro, and Bitfinex. Over the past year, ZRX has been listed or gained new pairs on several exchanges including Binance, Bittrex, Coinbase, Ethfinex, OKCoin.com, and Poloniex. 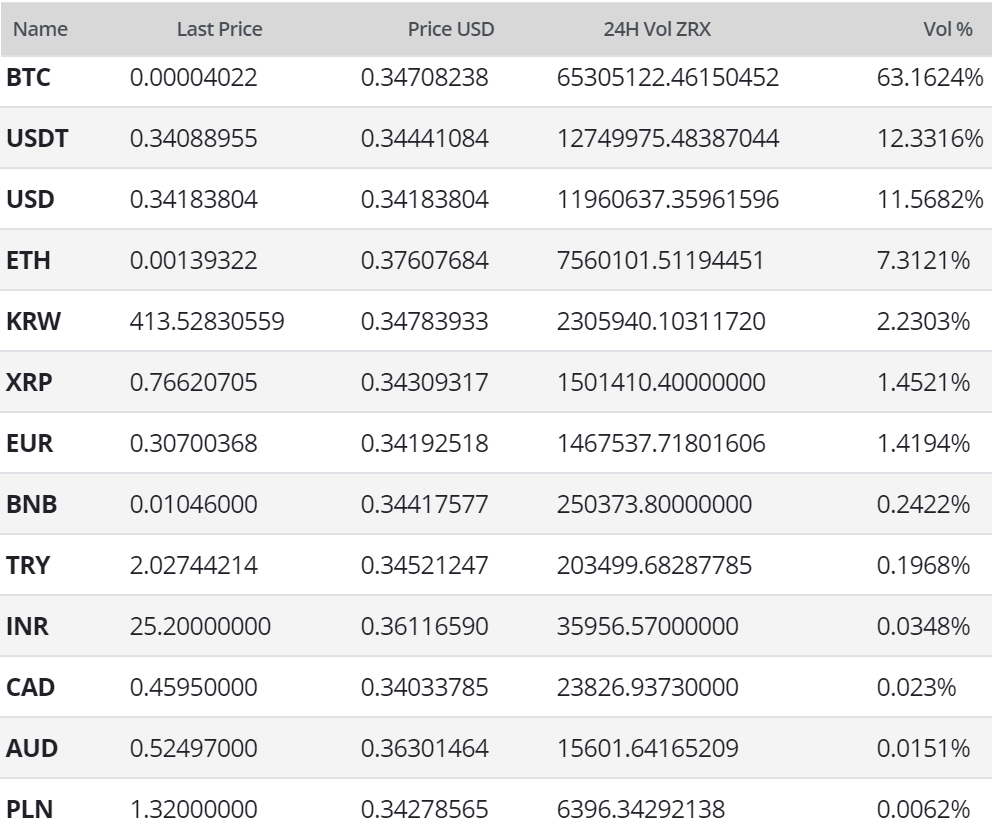 With the ZRX/USD price pushing yearly lows, value speculators will likely begin to take an interest. Knife-catching, or attempts to buy the bottom of a trend, can be profitable if done with discipline and patience. To determine entries and exits throughout a trend, as well as the potential for trend reversal, exponential moving averages (EMAs), chart patterns, volume, divergences, and the Ichimoku Cloud can be used. Further background information on the technical analysis discussed below can be found here.

On the daily chart, the 50-day and 200-day EMAs have been bearishly crossed since August 2018 with price mostly held below the 200-day since the cross. The potential for a bullish 50/200 EMA cross is possible over the course of the next few weeks, and should act as a technical catalyst for bullish price momentum. Resistance at the 200-day EMA matches the VPVR (horizontal bars) resistance level, suggesting price action above this zone would move to at least the US$0.50 level. There are no volume or RSI divergences at this time.

Turning to the Ichimoku Cloud, there are four key metrics; the current price in relation to the Cloud, the color of the Cloud (red for bearish, green for bullish), the Tenkan (T) and Kijun (K) cross, and the Lagging Span. Trades are typically opened when most of the signals flip from bearish to bullish, or vice versa.

Cloud metrics on the daily time frame with doubled settings (20/60/120/30), for more accurate signals, are bullish to neutral; price is above the Cloud, the Cloud is freshly bullish, the previous TK cross is bearish, and the Lagging Span is above price and below Cloud. A traditional long entry will trigger once the TK cross flips bullish with price above the Cloud, which has not been the case since May 2018.

Additionally, a potential bullish reversal pattern has formed, the inverted head and shoulders. Hallmarks of this pattern include a series of three lows with an extreme low in the middle. Next steps for the pattern include a break through the neckline resistance at US$0.37 with notable volume, and a possible throwback to the resistance turned support. The pattern carries a 1.618 fib extension and measured move of US$0.46 and US$0.55 respectively.

Lastly, on the daily ZRX/BTC pair, trend metrics suggest a bearish picture: price is below the 200-day EMA and below the Cloud. Based on the distance of price from the 200-day EMA and the formation of a TK disequilibrium on the Cloud, price action suggests oversold conditions. Mean reversal targets include the Kijun at 5,900 sats and the 200-day EMA at 6,900 sats. A high volume node based on VPVR also sits at the 6,744 sat level. There is also an Adam/Eve double bottom starting to form, further suggesting the potential for bullish reversal. There is no bullish divergence currently, but the RSI recently reached the second lowest level ever recorded in the asset?s short history.

Fundamentals show relayer fills and token use continues to decline after one of the biggest relayers, DDEX, forked the ZRX protocol in late December 2018. Users and relayers are not required to hold the ZRX token to trade on any ZRX platforms, giving almost no reason to interact with the token at all. The spike in transaction volume following the Coinbase announcement and addition to the platform has largely not been sustained over the past few months. Although the ZRX core team continues to be very active with an extensive upcoming roadmap, creating or retaining token value remains elusive. Relayers leaving ZRX, as well as a lack of governance structure for the protocol, yields a bearish outlook in the near term as organic demand is all but non-existent. If the potential roadmap improvements are added, ZRX token use cases and value may increase.

Technicals for the ZRX/USD pair show the early beginnings of a potential bull trend. A pending bullish 50/200 EMA cross, price action above the Cloud for the first time in a year, and a bullish reversal pattern all suggest upcoming bullish momentum. Upside price targets will likely find resistance at psychological zones of US$0.50 and US$1.00. The ZRX/BTC, although bearish, also looks poised for a bullish reversal based on oversold conditions, which is suggestive of bearish exhaustion. Based on technical resistance, a mean reversal towards the 6,000 sat – 7,000 sat zone is likely over the next few months.